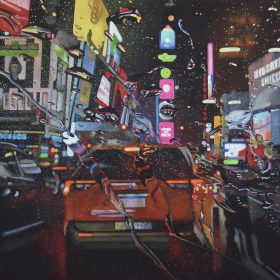 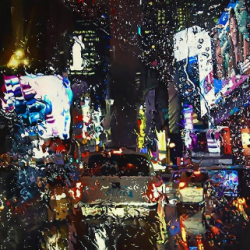 Michael Steinbrick obtained his BFA from Montclair State University. He honed his craft abroad at the Constantijn Huygens Academie in Kampen, the Netherlands. After his schooling he worked as a muralist and scenic designer in New York, New Jersey, and Chicago. It was during this time that he began to develop an interest in the city landscape.

Enrico Gomez, “Refracted Reality: Paintings by Michael Steinbrick” Michael Luongo: “The Flurry in a Moment”, Gay City New, vol. 11, issue 13, June 20, 2012 Brock Duke: “Dreams Come True” , Topcoat Magazine, April 2010
My paintings reflect a spiritual experience, a moment when a higher level of consciousness takes over the logical translation of what my eye is seeing. Influenced by the realists Edward Hopper and John Singer Sargent, and the photorealist Richard Estes, my paintings capture a quiet solitude amid the frenetic happenings of the big city. Some tell a story while others capture the beauty in the randomness of the ever-changing advertisements and street traffic below. These are fleeting moments when various elements come together to create a harmonious blending of shape, pattern, form, and color.

A Splash of Luck

A Splash of Spring