Shipping usually takes up to 7 days

This is the second Grace Kelly portrait that Peter Engels ever painted. The first one was bought by the Prince of Monaco. The Prince bought the art by Peter Engels during an art auction in Montecarlo after a bidding duel with the mayor of the French Mediterranean village of Eze.

This is the portrait of the young Grace Kelly before she became Princess Grace of Monaco. The artwork is accompanied by a separate canvas with Grace Kelly’s inspirational quote: “Don’t be like the rest of them, Darling”. 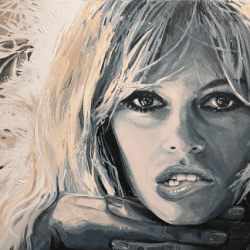