Shipping usually takes up to 7 days

Guy Portelli is a Contemporary Sculptor and elected member of the Royal Society of British Sculptors .
Guy’s early career as a sculptor begun at BBC TV in the special effects dept before setting up own studio in 1981, producing sculptures for the advertising market.
In 2005 he authored ‘Modern British Sculpture’ a comprehensive study of modern sculpture developments in Great Britain.
In 2008 I featured on BBC TVs Dragon’s Den, and secured backing to develop the ‘Pop Icon’ collection, since then there have been several updates showing the progress of the works. 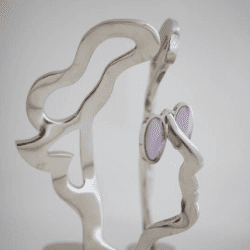